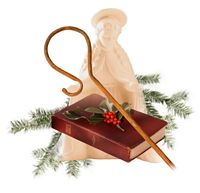 At this point in Advent, we all know that Mary said “yes” when approached by Gabriel with the announcement that God had called her to be the mother of Jesus. Nonetheless, as we reflect once
again upon this powerful moment of history, the question asked in Psalm 24 echoes in our hearts. “Who can ascend the mountain of the Lord?” We give the answer in faith, as we think about Mary’s Yes. Only the one “whose hands are sinless, whose heart is clean, who desires not what is vain” can undertake a mission like Mary’s.

In what way are you called to do this, to bear Christ to the world? It may be as a parent, a teacher, a farmer, or a friend. Or there may be any of a hundred other ways in which you are called.

When the phone rings and someone asks for a favor, or when the parish calls for help in various ministries, or when you see a need that you know you could meet, say “yes.”

Give me the courage of my words, O God. Help me to say “yes” when I am called to serve the world. Amen.

This site uses Akismet to reduce spam. Learn how your comment data is processed.