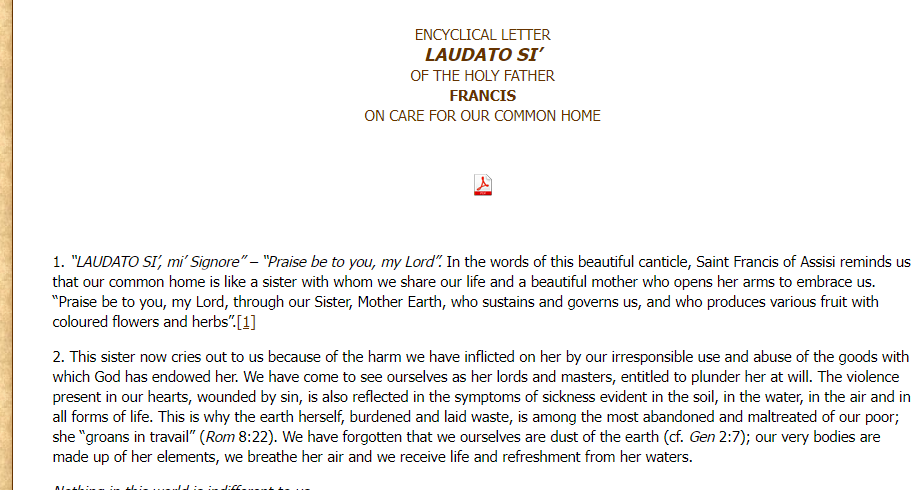 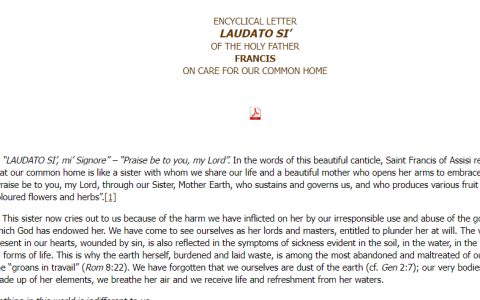 Occasionally, in my Notes, I will spend a few weeks examining a Church document. During the first few weeks of Ordinary Time this summer, I will be examining Laudato Sí, which translates as “Praise be to you.” This is from a line of the Canticle of St. Francis Assisi: “Praise be to you, my Lord, through our Sister, Mother Earth, who sustains and governs us, and who produces various fruit with colored flowers and herbs.” Laudato Sí, released in May 2015, is the second of three encyclicals Pope Francis has issued thus far, the other two being Lumen Fidei in 2013 and Fratelli Tutti in 2020. An encyclical is the highest level of papal teaching, and I outlined these other two encyclicals in my February and October 2020 Notes, respectively. Laudato Sí is subtitled “On Care for our Common Home,” and the introductory paragraphs connect the “harm we have inflicted on her by our irresponsible use and abuse of the goods with which God has endowed” the earth and the “violence present in our hearts, wounded by sin.” Pope Francis outlines writings by his predecessors on peace and the need for an “authentic human ecology.” The first chapter, entitled “What is happening to our common home,” analyzes climate, water, and biodiversity as well as socio-economic issues and how they are all interrelated. Following this analysis, Pope Francis notes: “On many concrete questions, the Church has no reason to offer a definitive opinion, she knows that honest debate must be encouraged among experts, while respecting divergent views. … Still, we can see signs that things are now reaching a breaking point.” He concludes, quoting Pope John Paul II, who remarked in 2001: “If we scan the regions of our planet, we immediately see that humanity has disappointed God’s expectations.” The second chapter, entitled “The Gospel of Creation,” reminds us that “we are not God. The earth was here before us and it has been given to us. … This responsibility for God’s earth means that human beings, endowed with intelligence, must respect the laws of nature and the delicate equilibria existing between the creatures of this world.” God’s creation is a complex web of interrelations, and humans are called to respect the lives of other humans above all but also to see, as the Catechism of the Catholic Church states, that “each creature possesses its own particular goodness and perfection” and that “God wills the interdependence of creatures. … The spectacle of their countless diversities and inequalities tells us that no creature is self-sufficient. Creatures exist only in dependence on each other, to complete each other, in the service of each other.” This is an illustration of one of the bedrock principles of Catholic Social Teaching, the universal destination of goods. While each person has the right to private property, this right is neither absolute nor inviolable. Rather, as Pope John Paul II wrote: “God gave the earth to the whole human race for the sustenance of all its members, without excluding or favoring anyone.”
In Christ’s Peace,
Fr. Bill

This site uses Akismet to reduce spam. Learn how your comment data is processed.